The Boy in the Picture 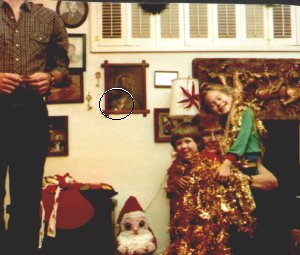 Largo, Florida 1985.  Notice the little face in the left side (bottom) of the Jesus picture on the wall.  (Circle added by me to isolate image) 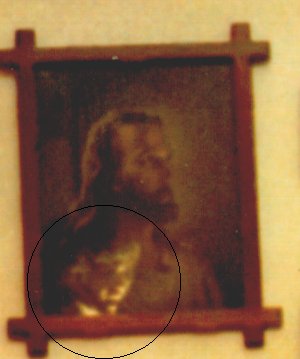 Here's the story that goes with the picture:

This was taken in 1985 just before Christmas. The experience of a family of 7 were many, but here are the most memorable. My dad built the house in the `50s, so only we lived there, but the house was always haunted. It had a sense of foreboding that never left. Our dogs often stared, growled, and bristled their hair, eyes following something we could not see. My sister lay in bed one night and heard chains and growling dogs running back and forth from window to window outside her room. She ran out terrified. She woke up one morning to see our dead grandpa standing at the foot of her bed, smiling. Doors opened, there were cold spots, unexplained noises, odors, lights going on at all hours, washer and dryer coming on at 3 a.m.

My dad had a 30 foot boat trailored out in the yard thats engine would suddenly roar into life late at night. Once my dad was yanked out of his bed by the ankles. His screams woke my mother who found him wide eyed on the floor. I was grabbed, hard, in the sides and tickled while I was in bed. It hurt and I was swinging my arms trying to hit whoever it was, and my arms just swung thru the air hitting nothing, yet the tickling continued. It was so hard it was lifting me off the bed. I thought it'd never stop, but finally it did. My parents often came home to find us kids sitting out front waiting for them to come home because we had been scared out of the house. We heard footsteps, and things often turned up missing, only to reappear later in a most obvious place. Toilets often flushed with a jiggling of the handle just to be sure. The picture told us what we already knew, we had a ghost.

A physic told my folks our home was cursed and they had it blessed. But "it" became more active. Years ago we tried a Ouija board. We asked if a spirit haunted our home. It said yes, but would give no further information. My folks tried the board alone, and whatever it said terrified them. They threw the board away and refuse to tell what it told them. They said "they forgot". We know now leave those boards alone! Even though we no longer live in Largo, my parents still experience paranormal phenomenon as did I in my home (that story you have) (Haunting in my home 8-1-98). I often wonder if it is all connected. Who knows. Thank you for your interest.

A film expert said the face is not a flection or camera error. He said whatever "it" is, it is behind the glass with the picture of Christ, and has its' own light source lighting up its face. He asked that we never bring film to him to be developed again. He was that scared.

Shadow Lord's Note:  I scanned the pictures that appear on this page and I tried to get the best possible results.  The actual photots were mailed to me, including a 8x10 enlargement of the face, and the originals are alot clearer.  They are really amazing photos.

back to The Shadowlands Ghosts page