A Swedish monster hunter believes he may have caught Norway's equivalent of the Loch Ness monster on film.   Jan-Ove Sundberg says he may have filmed the serpent - Selma - in Lake Seljord.

Aftenposten quotes the Varden newspaper as saying he's studying a 20-second clip before releasing it publicly.   The expedition leader said he saw something 30-40 centimetres long, black with a possible tinge of red and white.  Sundberg made a similar sighting four years ago and chose not to publish the film due to poor quality.   The footage taken then and now will be compared.  The Swede got the latest footage on the final day of this year's expedition to the lake in Telemark.

At first, Sundberg thought he saw a buoy in the water but was surprised when he focused more closely on the object.   "I have either filmed a gnarled head or the upper part of a hump complete with serrations," Sundberg said.

"The others didn't get a chance to see what I saw because suddenly it was gone. So it couldn't have been a buoy.

"Ducks can dive but they come back up. This didn't, so I don't understand what it could have been except for the sea serpent," he added.

LAKE POHENEGAMOOK (NEWS CENTER) -- For centuries people in Scotland have talked about a monster lurking in Loch Ness, called "Nessy." It turns out, just a few hours away from Bangor there is talk of a similar creature named "Ponik."


Natives of the Canadian border town of Pohenegamook first reported seeing a huge creature in the lake in 1873. Some people even feared the waters.

Guy Leblanc is the mayor of Pohenegamook. He, like everyone else in this modest town of 3,000, has heard the tales of the monster of the lake.

"Prehistoric monster, stuff like that or it was walking on the beach and flames were coming out of it's mouth, that's kind of the folklure side of the legend," said Leblanc.

Leblanc is one of several people who claim to have laid eyes on the creature. He says he saw Ponik in 1990, when he had taken some friends for a ride on his boat.

"I saw that kind of a wave it was kind of special, cause no boat was on the water except mine," said Leblanc. "We saw a big big fish beside my boat. He was swimming. And he was very nice. He swam about ten seconds for us and that was incredible."

Leblanc thinks what he saw was a giant sturgeon. Word of his sighting spread fast, and soon others were coming forward claiming to have seen Ponik.

"That's why that legend never stops," said Leblanc. "Always somebody every year saw something."

While some people describe seeing a giant fish, others have reported seeing a more serpant like creature with a snake like body, humps, flippers and a horse like head.

Still, there are those who think the legendary Ponik is just that a legend.

While many people claim to have caught a glimpse of the creature, no one has captured it's image. In 1997, an area business even offered a half a million doilars to anyone who could get a picture of Ponik.

Despite that, Ponik has it's own festival. And most people agree that the mystery makes for good tourism business.

Leblanc hopes Ponik lives in this lake as long as the legend has.

"We want him alive so the legend can carry on," said Leblanc. 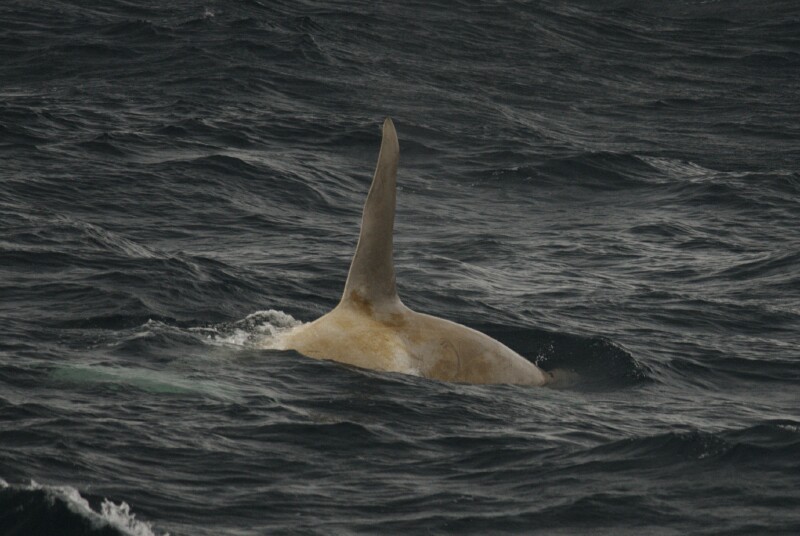 The sighting of a rare, white killer whale off Alaska's Aleutian Islands is causing excitement among researchers and whale enthusiasts.

The whale, photographed by scientists on a U.S. National Oceanic and Atmospheric Administration vessel, is a large, healthy male, said John Durban, research biologist with the administration's Alaska Fisheries Science Center in Seattle.

"There are various things that can cause albinism and they're all associated with health problems," he said. But, according to Durban, it appears the colour of the newly photographed whale may be due to a genetic mutation, as he has slightly lighter and darker colorations, meaning he is not a true albino.

The whale, photographed last month, was in a family group of about 12, and all the others were classic black and white.


BACK TO THE MYSTERIES PAGE.

BACK TO THE SHADOWLANDS

The images on this page were obtained from publicly available sources, and to the best of our knowledge, the images are in the public domain. If you own the copyright on any image on this page, and you would like us to remove it, please identify yourself and the image, and we will. If you own the copyright and you are willing to give us permission to use the image, we would like to know that also.