There really is something unsual about the island of Pag. After all those sightings of strange lights I already wrote about and finding that huge triangle carved into rock, not to mention rocks falling from nowhere, there was another sighting this week.
During Tuesday afternoon (June 4th) and the night from Tuesday to Wednesday (from June 4th to 5th, 2002), above Velebit, Podvelebitski channel and Pag, an unusual light phenomenon has been sighted. First sighting has been reported by phone to
local radio station, Radio Pag, just after 6 p.m., and another one at 8:30 p.m.

Among the first witnesses was a group of tourists from Germany currently situated in Pag, on a promenade near hotel Pagus, an employee of Hrvatske ceste company, and several families from the south-west of Pag, near Vodice. Right after the first sighting, witnesses notified the C.I.M.P. (its a society that observes and takes notes of strange phenomena) from Pag whose members immediately organized a sky-observing action that lasted from 6:30 to 8:00 p.m., but without result.

At 9:30 p.m., another sighting has been reported to Radio Pag. A C.I.M.P. member, Josip Fabijanic managed to take a photo of the UFO during the last seconds of its appearance from the balcony of his house in Vodice. The light has been of round
shape which occasionally turned into cyllindric, and it glowed in several colors. Its edges seemed more greenish than the inner part, which was mostly red.It was slowly ascending and, as witnesses said later, stood in one place for about
fifteen minutes. After that it disappeared. At 9:45 p.m., several airplanes flew over the area. Most eyewitnesses say that there were two airplanes, but Kresimir Fabijanic, Josip Fabijanics brother, says that there were three airplanes and one helicopter.
At least one airplane came from the north (possibly from the air force bases in Istra and on Krk), and another one from the east. The evening was cloudy, which means that the UFO (which was double larger from the airplanes silhouette) was rather low.
It also excludes Venus, any other astronomical phenomena, and a weather balloon. Weather balloons glow only when Sun shines at them in the heights.

C.I.M.P. members determined that the UFO appeared at an exactly same spot as the UFO that appeared on December 13th, 1997, and that their paths were almost identical.

Results of an official investigation are expected to be published soon.

Those who have seen the phenomenon at 6 p.m. said that there were actually two objects, completely identical and cyllindric, occasionaly round-shaped.

On Wednesday, C.I.M.P. members have sent a request to several services that regularly monitor Croatias night sky to see if any radar or visual contacts have been made. After that theyll publish their results.

Right after I found out about the UFO hovering above Pag I tried to take a photo of it. I did it during the last seconds, when it already began to disappear. I only managed to take one photo. However, it is a valuable document that C.I.M.P. will continue studying.,said Josip Fabijanic.

What can I say? The fact is, this is not the only phenomenon that occurred above Pag or in its surroundings. Ill try to do some research during summer (this year Im having a holiday in Vodice) and write an article that will cover all sightings ever recorded in that part of Croatia (I dont know if its true, but I heard that the first reported sighting dates all the way back to 15th century). 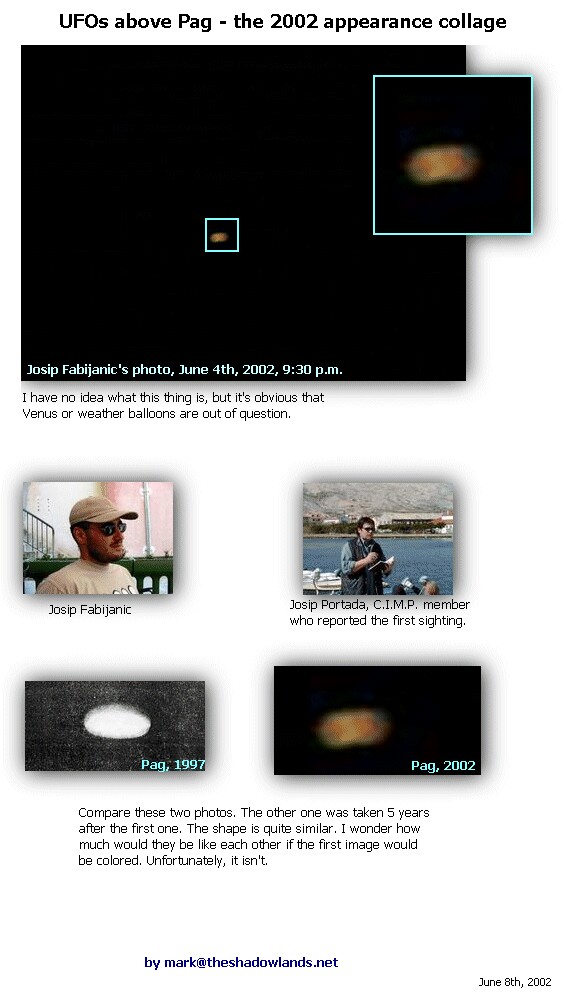