The latest articles press releases and photos of the red planet and the search for life on it....

Photo from sent from Opportunity Rover 1/2004

Picture from the Pathfinder mision

Nasa press release about meterite with evidence of life

Article #1 about the evidence of life on Mars

Article #2 about the evidence of life on Mars

LONDON (Reuter) - British astronomers said Thursday they had found evidence to back reports from U.S. space scientists that they had found traces of life in a meteorite from Mars.

They said samples from two separate Martian meteorites showed definite traces that could have been left by living organisms, and one was recent enough to indicate that there still could be life surviving somewhere on Mars.

"We have identified a second meteorite which appears to contain matter that we define as organic," Colin Pillinger, an astronomer at Britain's Open University, told a news conference.

Pillinger said his team had also taken a second look at a sample from the meteorite -- known as ALH84001 -- that the U.S. space agency NASA said contained traces of life.

That sample, he said, contained traces of a carbon isotope -- a variant of carbon -- that is often formed by microscopic life forms on Earth.

"These pieces don't actually say that there was definitively life on Mars, but they tend to redress the balance," Pillinger said.

He told the news conference there had been a lot of criticism of the NASA announcement and scientists wanted to make sure interest in the subject did not die out.

But when they re-examined old meteorites after NASA's announcement last summer, they were surprised at what they found.

NASA said tiny traces in its sample of ALH84001 could have been left by tiny bacteria. Studies published since then questioned that finding, some saying the little holes in the ancient Mars rock seemed to have been formed at temperatures too extreme for life to survive.

But Pillinger said his group's findings added weight to NASA's claim. The carbon isotope, carbon 12, is found in methane on Earth produced by tiny bacteria that live in places like cow's stomach's and rice paddy fields.

NASA's meteorite is believed to have been knocked off Mars by an asteroid and thrown into orbit 16 million years ago.

"This throws it into a time when life would have been teeming on Earth," Pillinger said.

LONDON, Oct. 31 (UPI) _ Mars may have had life as recently as 600,000 years ago _ a sign that something might still be alive there _ said three scientists in the United Kingdom Thursday.

At a meeting of the Royal Society hosted by the U.K. minister of science, researchers presented new evidence to support the idea that meteorites from Mars show traces left by ancient life.

In August, NASA scientists had suggested that a potato-sized chunk of Mars picked up in Antarctica held traces of one-celled life at least 3.6 billion years old.

Now evidence of organic matter has turned up in a much younger meteorite and in further analysis of the first rock, said Ian Wright, Monica Grady and Colin Pillinger from Open University.

The second meteorite has up to 1,000 parts per million of organic matter that hitchhiked on the rock as it came from Mars instead of just smearing onto the surface when it crashed to Earth, said the researchers.

This second meteorite formed only 172 million to 177 million years ago, much later than the 4.5 billion-year-old rock NASA studied. Researchers have suggested that Martian microbes lived in groundwater that seeped through tiny cracks and pores in the rock, and might have been thriving until the rock left the planet. Previous studies concluded that the young meteorite shot into space some 600,000 years ago, perhaps when a huge rock slammed into the planet and kicked up debris.

This finding brings the possibility of Martian life much closer. The NASA team had estimated their traces were 3.6 billion years old.

The researchers also studied the same rock that NASA had examined. The ratio of carbon forms in the older meteorite matches the pattern of living microbes producing methane. That pattern can only be produced by something living, at least as far as Earth scientists have observed.

The researchers also pointed out that the pattern of components in the meteorite matched a pattern in organic matter in the Earth's oldest fossils.

``This is fairly strong supporting evidence,'' said NASA's Everett Gibson, from the Johnson Space Center in Houston, one of the NASA scientists who proposed the meteorites held traces left by ancient life. ``We're really quite pleased,'' he said.

He would not comment on whether the new evidence makes current life on Mars seem more likely. He did point out that if both meteorite analyses are right, life on Mars survived a long time.

Michael Meyer from NASA headquarters in Washington, a specialist in the search for life in space but not a member of either team of meteorite analysts, said the new announcement was stirring up considerable excitement in the planetary science community. The new evidence is ``pretty strong,'' he said. Finding traces that from such a young meteorite _ young at least in the eyes of astronomers _ raises hope for finding traces of life now. ``Six hundred thousand years ago? That's yesterday!'' Meyer said.

after the new evidence, ``I think you'd get people to bet there's life on Mars,'' Meyer said. 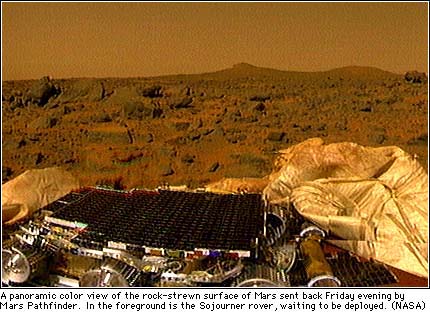 Ruins on the martian surface ?
the final answer to this question

There is considerable interest in this unusual feature on the surface of Mars.

It was photographed during the NASA Viking mission to Mars, and NASA's official position is that it is probably a "natural" formation, created by simple wind erosion. Many investigators feel otherwise, including Richard Hoagland, who helped bring this to the public's attention.

He, and many others, have come to the conclusion that it must have been deliberately constructed (perhaps carved from a natural hill that was already there). The builders, if any, are unknown, but given the advanced alien presence we currently seem to be dealing with on our own planet, it may very well be that these same beings constructed this fascinating feature.

The object is approximately a mile long, from the chin to the top of the head. The eye sockets are nearly the size of a football field, and it rises 15 hundred feet above the flat suface of the Cydonia region of Mars. The black spot on the right side of the face is a reference mark in the image, not part of the feature itself. The dark area under the chin is a shadow being cast by the feature.

Computer analysis has shown it to be greater than 95% symmetrical, which makes it very unlikely that it is a naturally eroded formation. This symmetry means that the features on the right half of the "face" are 95% identical to the features on the left side, and the two sides are a mirror image (just as in a real face). Even the "hair" matches on each side.

The question is, if alien beings contructed this "face," what was or is the purpose? One possibility is that it may have been intended as a "sign" for humanity to find, when we were able: one more clue that there are "other intelligences out there." Some people have pointed out that this is similar in concept to the strange monolith found on the moon in the film 2001: A Space Odyssey.

What appear to be bacteria are contained in two meteorites believed to be from Mars, according to a team led by Johnson Space Center geologist David S. McKay, who presented his findings Thursday at the Lunar and Planetary Science Conference.

"My own opinion is that these will turn out to be true micro-fossils from Mars," McKay said. "We're not counting on getting many converts. All we ask, though, is that people keep an open mind."

The scientist was one of the researchers who in August 1996 announced the discovery of tiny fossilized structures in crevices of a 4 billion-year-old Mars meteorite found in the Allan Hills region of Antarctica in 1984.

For the past three years, rival researchers and other scientists have debated the significance of the NASA team's earlier findings from Mars. Independent analyses of the Mars rock have failed to yield absolute evidence that the potato-sized chunk ever contained life.

PASADENA, Calif. (Reuters) - The Mars Odyssey spacecraft has identified what appear to be large areas of ice on the red planet's surface, a discovery (news - web sites) that could prove key to the search for life there, U.S. space scientists said on Friday,

Odyssey, which began mapping the Martian surface last week, used a suite of gamma ray spectrometer instruments to detect significant amounts of hydrogen near the planet's south pole, which scientists said are most likely due to the presence of ice formed from water.

Earlier missions to Mars by NASA's Viking Orbiter and Global Surveyor spacecraft have previously suggested that ice might be found on the red planet and scientists have concluded that water once flowed there, creating deep canyons and other geologic features that can still be seen.

But the findings by Odyssey, which was launched in April of 2001 and arrived in Mars orbit in October, could provide the first real proof of ice still formed on the surface.

"We're delighted with the quality of the data we're seeing," Stephen Saunders, Odyssey project scientist, said. "We'll use it to build on what we've learned from Mars Global Surveyor and other missions. Now we may actually see water rather than guessing where it is or was."

Scientists said preliminary assessment of the data suggest the presence of hydrogen in the upper few feet of the Martian surface in an area about 400 miles across.

"If you were an astronaut walking around on the surface of Mars you could kick the ground and see ice crystals," Boynton said. "You could melt it and have water."

Boynton said scientists were excited about the discovery because the presence of water ice suggests water, and water suggests life on Mars.

"It's really because we need to understand what happened to all the water that made these canyons and where that water went," he said. "We want to understand the climate of the planet and its changes."

Boynton said scientists have several theories to explain what happened to the water that once flowed on Mars, with most believing that the planet was formerly much warmer.

"Mars is really a very, very rich environment," he said. "It's not the dead planet that we might have been taught that it was in high school."